Gergő Borbély and Mariona Alabau are the founders of Elixsea Wines. They are from Hungary and Ripolles respectively and met through their love of diving. They travelled the world working as instructors before starting their project in L’Estartit (Costa Brava) in 2017. Ageing underwater, they now have wines from Scala Dei and a rather well-known Tokaji winery (to be announced!) amongst others. Gergő completed the WSET Level 2 course with Wine Courses Barcelona in 2019. The pair came back to the city in early March, to host two nights of comparitive tastings of their Priorat wines, SeaStar and LegaSea, and to chat with us about diving, treasure hunting, WSET and experiments gone wrong. Curious? Read on…

What were you both doing prior to starting the project?

Gergő: Where I’m from we don’t have sea or big lakes. So I started as a wine waiter, then studied hospitality at the Budapest business university and then after a few years… I needed something new. Then I started travelling and I got this new hobby, diving. That was 6 or 7 years ago and I haven’t stopped since… With my best friend we did a season here in Spain and that’s when I met Mariona.

How and when did the project begin?

M: When I met Geri, at the time I was a bit trapped because I was working a lot with agriculture and wine was catching my attention but not for the wine business, more for the processes of agriculture and making wine. We were looking to do something unique; something that could mix the sea and… the plant world. There is this project in Italy where they are growing plants underwater. It’s amazing. Strawberries, lettuce… they are saying the land is very limited and we are all the time more and more (people), but if you can occupy the space of the sea and we can make agriculture under the sea then that could be a solution for water wastage, control of pests, all these crazy things… Then Geri said: ‘So, why don’t we put wines underwater?’ 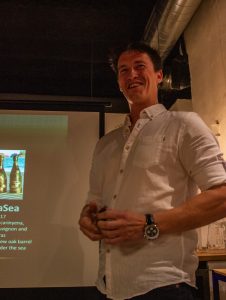 G: The idea came in 2016 but we were still working in Thailand. Then later on we were asked to work in Iceland for six months… At the time we (were) here in Spain and we’d already thought about this project, so five or six bottles went down under water without a cage, with nothing, not even a seal. In the meantime we were doing some research to understand the possibilities. After half a year we came back and recovered these wines and it was a disaster. We pulled the cork and honestly, it smelt like fart! It smelt horrible. Because we hadn’t figured out that we should put some waterproof wax seal on top. The pressure under water… at eighteen metres is 2.8 atmospheres… So obviously the corks went straight in, at least on two or three of them. And the others were just pushed half-way in and the water had just been coming in for 6 months and the cork was completely soaked and had started rotting… That was our first experience and we didn’t want to share that with anyone! But then we went to Priorat… We went to Scala Dei and they were more than welcoming, (though) we were just such beginners. So we went there and did a small presentation about the idea and at the end, closing the presentation, we showed him a video of when we were recovering the bottles. They were all Priorat wines and he (saw the label and) was like, ‘Wow! That’s our bottle! How did it go?’. Yeah well, we said, we’re improving (!). Then we worked even harder, we found out how to protect the corks and the wine from water damage, which is by a seal. Something like a wax but it’s thicker and it’s harder and it’s water resistant.

So now we’ve sorted out this problem, the wines smell as they should. It was really nice to work with Scala Dei … and also we figured that (since) underwater the wines are becoming a little bit softer, rounder and the tannins are a little bit lower, what better thing to start with than something higher (in tannin), stronger like Priorat wines at 14.5-15% of alcohol. 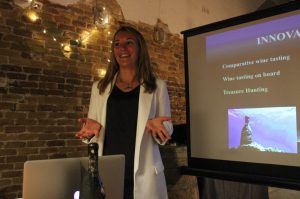 M: Geri has been explaining the very beautiful part but in the meantime we were going… through a path full of pain with the concession. When we arrived and we just thought we’d get the bottles, we’d put them in a cage, we sink them underwater and we start selling wines! But then we realised that the sea belongs to the government and so you cannot just take a cage and place it randomly. It took us around two years to find a place. Because you need to look for a place that is protected from the thunderstorms to the East… We had to do environmental studies, choosing places that cannot be rocky, has to be sandy so that the structures attach better. No natural parks, no fishing areas, no urban areas. At the end it’s more ‘No, no, no, no, ah! We can stay here!’… And then we had to ask permission from the government and for us this was the biggest struggle… We were actually a little bit depressed because one day we received a ‘no’… and then we looked for more back-up from the universities, from Incavi, from the Departament Empresa i Competivitat, we were looking for partners, sponsors and we did it! We did it last December only.

What are your plans for the future? 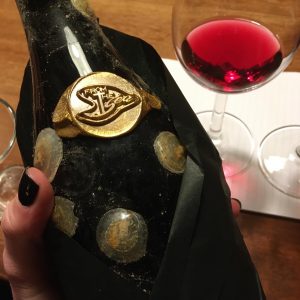 G: We are approaching hotels, restaurants and distributors to see if they could use our products in their market. But what’s much more exciting for us is the local community in the Costa Brava. We have spoken to many dive centres about a new activity: treasure hunting. We’re going to put a small metallic cage underwater, at a dive site, with a couple of bottles inside. Whoever signs up for this activity will have to find it! Also we are planning wine tastings on boats.

M: A hotel I called told me they wanted to organise a… wine-themed weekend in the hotel. They asked to visit our winery. Well, I replied, it’s underwater so I think it’s going to be a little bit difficult! But actually this person gave us the idea. If we cannot take people to our winery, then we take our winery to the people. And then we can take our wines to have visits in different ways representing the sea. This year we are also going to start doing research with universities to understand why the wines are changing. Other wineries (have suggested that) because the marine life is getting attached to the bottles, they become less hydrodynamic. They are moving and they are vibrating. The biggest underwater winery in Spain have stated that this is why the wine evolves differently but we want to know it. So that’s why, this winter, I’m going to start a PhD to research this.

What’s the secret to working and living happily together?

M: We find time for ourselves, not only for the company. For me it’s nice because it’s like a project. It’s not only with Geri that we share travelling or diving or other activities, we are also sharing a baby. ElixSea is our baby! Sometimes there are ups and downs, sometimes it’s seems like we are just ElixSea, Geri and Mariona; we are no longer a couple. But then sometimes when you see that everything is working: it’s a project that we made, we created it and it strengthens our bond. We know that it’s hard and we put a lot of effort, so then when it succeeds it’s very rewarding.

So Gergő, why did you decide to do a WSET course?

G: Obviously we had started a wine business and I wanted to deepen my knowledge in the world of wines. I brought the basics from home, from the family winery… but I wanted more of an understanding of the wines around Europe in particular.

What did you enjoy most about the course? 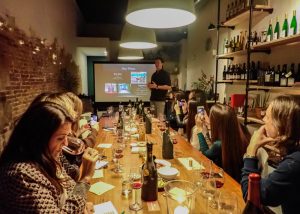 G: Everything! I remember on the first day during the introductions you asked us to state our name and say the place where you’d most like to be at that moment. And I remember my answer was ‘Right here, right now!’ because I was so much looking forward to the course. I was so excited and I loved wines. So tasting wines and learning about them? I didn’t know where else I could hope to be. I really enjoyed how enthusiastic you were when you were explaining your feelings and thoughts about the wine. That was really impressive for a student, because the whole group caught this enthusiasm and wanted to speak up. It was very dynamic and a very friendly atmosphere.

What advice would you give to prospective WSET students?

Good advice, Gergő! If these guys have inspired you to grab a glass and get involved, then start your own wine journey with Wine Courses Barcelona today. Gergő and Mariona will also be back in Barcelona hosting tastings of ElixSea wines in July! Visit their Facebook page for more information or go to WinesUnderwater.com to learn more.

More articles from our blog

Grab a glass, get involved!